Dancing with the Stars 11

The eleventh season of Dancing with the Stars premiered 20 September 2010.

Several changes were introduced this season including an "Acoustic Week," in which couples performed either the Rumba or the Argentine Tango, while the audience was brought closer to the dance floor, which was elevated and made circular, a "TV Theme Week" and a "Rock n' Roll Week", in which couples performed the Paso Doble or the Tango and danced in a Rock 'n' Roll marathon.

Bristol Palin returned for the all star season, with her original partner Mark Ballas.

Corky Ballas returned to the show for the first time since Season Seven. This is the first season to feature no new professional dancers, as each of the twelve pros had appeared on at least one previous season. Edyta Śliwińska, the only pro to have appeared throughout the entire run of the series, did not return this season. 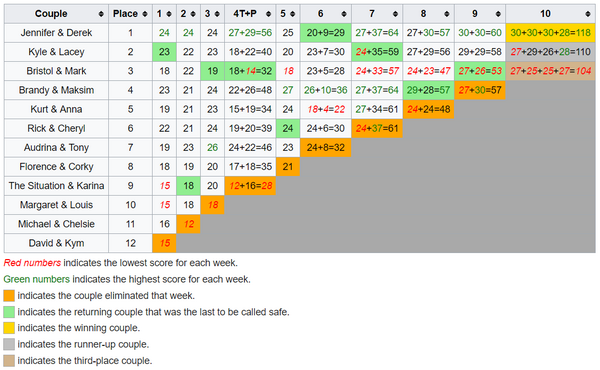 Audrina Patridge is the only star to not land on this list.

Individual judges' scores in the chart below (given in parentheses) are listed in this order from left to right: Guest judge, Carrie Ann Inaba, Len Goodman, Bruno Tonioli

* In the weeks beforehand, viewers submitted requests for the style of dance (Cha-cha-cha), song, and professionals to perform the dance. Also, Dancing with the Stars held an online contest in which viewers could submit concepts (costumes, story, etc.) for the dance and were eligible to win a free trip to the show. The viewers then voted on the finalists. Abby Stonewall Kapp from Charlotte, North Carolina, won with her idea of a 1950s themed dance.