Dancing with the Stars 12

The twelfth season of Dancing with the Stars premiered 21 March 2011.

This season featured eleven celebrities, one less than the previous season.

Kirstie Alley returned for the all-star season with her original partner Maksim Chmerkovskiy.

On the official website, a page gave people the chance to recommend celebrities they wanted to see in Season 12 of the show through comments.

Defending champion Derek Hough did not return due to other obligations. He returned for Season 13.

Corky Ballas, father of Mark Ballas and partner of Florence Henderson from the previous season, did not return this season either. Dmitry Chaplin, Season 9 finalist, participated instead of the two formers.

The cast was revealed 28 February 2011, during The Bachelor, and the professional partners were revealed 2 March 2011. Hip hop artist Romeo, injured before the beginning of broadcasts of Season Two, and replaced during that season by his father, Master P, was one of the competitors in Season 12. 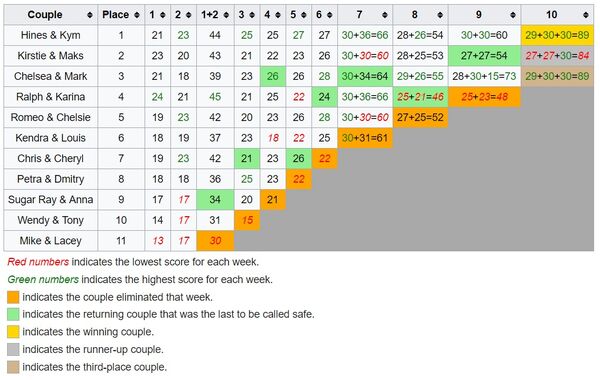 Petra Němcová is the only star to not land on this list.

Pia Toscano singing on Dancing With The Stars

Individual judges scores in the chart below (given in parentheses) are listed in this order from left to right: Donnie Burns, Carrie Ann Inaba, Len Goodman, Bruno Tonioli