Dancing with the Stars 14

The fourteenth season of Dancing with the Stars premiered 19 March 2012.

The Motown dance style was introduced.

All the professionals from Season 13 returned except for Lacey Schwimmer, who was replaced by Chelsie Hightower. Two new professionals were added into the Dance Troupe, Henry Byalikov and Emma Slater. They joined Sharna Burgess, Kiki Nyemchek, Oksana Dmytrenko, and Sasha Farber.

Starting the week of 16 April and for the next two weeks after that, the bottom two couples, after a combination of judges scores and viewer votes, competed in a dance-duel. Both couples performed at the same time and then the judges decided who left the competition that week.

This season introduced "Ballroom Battles" where Cheryl Burke, Mark Ballas, Louis van Amstel, Lacey Schwimmer, Karina Smirnoff and Tony Dovolani chose a pair of amateur dancers and trained them to compete against other amateur couples. The teams of Burke, Dovolani and van Amstel competed in the final stage by performing a Jive. Burke's team were named champions by the judges with Dovolani's and van Amstel's teams taking second and third places respectively. 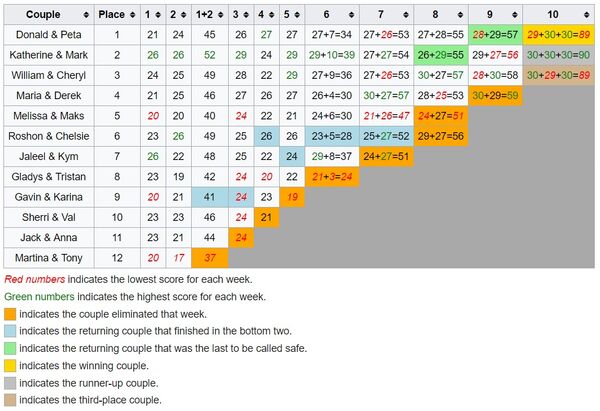 Jack Wagner, Sherri Shepherd, and Roshon Fegan are the only stars to not land on this list.