Dancing with the Stars 15

View source
watch 01:36
We're Getting Mutants in the MCU - The Loop
Do you like this video?
Play Sound

The dance styles Bollywood and Disco were introduced, and Rock 'n' Roll returned.

The names of twelve returning celebrities were revealed 27 July 2012. All twelve professionals from Season 14 returned. A thirteenth contestant was chosen by the public from among Sabrina Bryan, Kyle Massey, or Carson Kressley. Bryan was announced the winner 27 August 2012 over Kressley and Massey. Louis van Amstel was partnered with Bryan, while the professional partners for the first twelve celebrities were revealed 13 August. Mark Ballas and Cheryl Burke were the professionals with the most returning partners (three) and each reunited with one. Five contestants reunited with their original partners, while the other eight danced with new ones.

This season is the only one to offer fractional (0.5) scores. 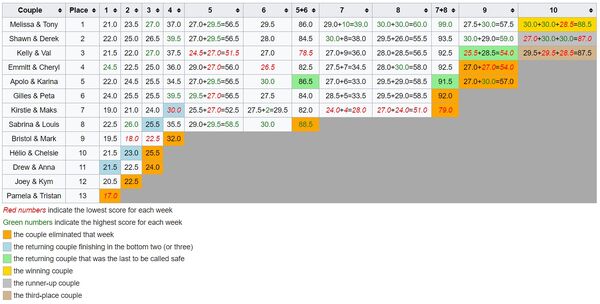 Individual judges scores in the chart below (given in parentheses) are listed in this order from left to right: Carrie Ann Inaba, Len Goodman, Paula Abdul, Bruno Tonioli.