Dancing with the Stars 16

View source
watch 01:54
Obi-Wan Finale - The Loop
Do you like this video?
Play Sound

The sixteenth season of Dancing with the Stars premiered 18 March 2013.

Twelve celebrities competed this season, one less than in the previous season.

The cast of eleven and their professional partners was announced 26 February 2013 during Good Morning America, with Jacoby Jones' participation confirmed two days earlier on 24 February during a network promo for the series airing during the 85th Oscars as a tease for the GMA announcement. Two weeks after the cast announcement, Sean Lowe was revealed as a twelfth contestant dancing with Peta Murgatroyd.

This season saw its youngest contestant to date, sixteen-year-old Zendaya. Previously, the youngest was Shawn Johnson from Season 8 at seventeen. In Season 20, the record was taken from Zendaya by Willow Shields who competed when she was fourteen.

Witney Carson, also a contestant from Season Nine of So You Think You Can Dance, and Julian Tocker joined Oksana Dmytrenko, Henry Byalikov, Emma Slater, and Sasha Farber as the fifth and sixth members of the Dance Troupe.

After only two dances, Dorothy Hamill withdrew from the competition due to a potential severe back injury. She is the third celebrity to withdraw due to injury, after Misty May-Treanor in Season 7 and Tom DeLay in Season 9. Sara Evans in Season 3 also quit, but that was due to her impending divorce. This also marks the second consecutive season where Tristan MacManus and his partner have gone home first in the competition, although last season he and his partner were actually eliminated the first week. This is the first time since Season Nine that a couple withdrew. 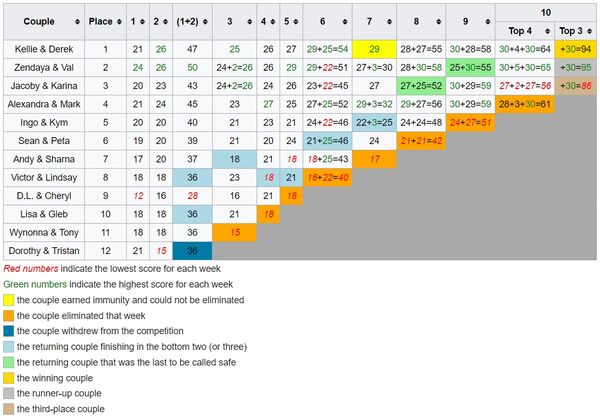 Lisa Vanderpump is the only star to not land on this list.