Dancing with the Stars 17

The seventeenth season of Dancing with the Stars premiered 16 September 2013.

The Harold Wheeler orchestra and singers provided the music throughout the season.

The cast of twelve and their professional partners was announced 4 September 2013 on Good Morning America.

All of the previously competing professional dancers returned for Season 17 with the exception of Gleb Savchenko, Lindsay Arnold, and Kym Johnson (who took the season off to be a judge in Season 13 of the Australian version of the show). They were replaced by Tyne Stecklein, Emma Slater, and Sasha Farber. However, Savchenko and Arnold joined Henry Byalikov and Witney Carson in the Dance Troupe, replacing Julian Tocker and Oksana Dmytrenko, therefore reducing the troupe to four professional dancers.

This is the first season since Season One to not have a results show. Another change was the elimination of the sky-box area where host Brooke Burke interviewed dancers after their performances. Instead, the couples were accommodated in a new seating area near the judges' table which had been shifted to the opposite side of the ballroom. A make-up room and rehearsal room were added where Brooke Burke could chat with the couples before and after their performances.

This season also introduced a new format of voting. Each week the couples performed, and the judges gave each couple a score based on several factors, including technical execution. Since there was no results show, those scores were added to the public votes from the previous week, and the couple with the lowest combined score from judges and viewer votes was eliminated from the competition toward the end of that week's episode. 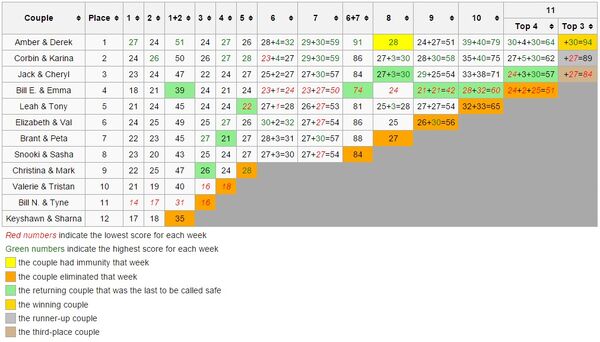 Unless indicated otherwise, individual judges scores in the charts below (given in parentheses) are listed from left to right: Carrie Ann Inaba, Len Goodman, Bruno Tonioli.

Individual judges scores and votes in the charts below (given in parentheses) are listed from left to right: Carrie Ann Inaba, Julianne Hough, Bruno Tonioli.

Individual judges scores and votes in the charts below (given in parentheses) are listed from left to right: Carrie Ann Inaba, Cher, Bruno Tonioli.

Individual judges scores in the chart below (given in parentheses) are listed from left to right: Carrie Ann Inaba, Len Goodman, Maksim Chmerkovskiy, Bruno Tonioli.