Dancing with the Stars 20

The twentieth season of Dancing with the Stars premiered 16 March 2015.

This season marked the tenth anniversary of the show. In honor of the anniversary, this season's winner received a unique, golden Mirrorball Trophy.

Ten professional partners were revealed 11 February 2015 on Good Morning America. Professionals from last season not returning include Cheryl Burke and Karina Smirnoff. Kym Johnson returned as a professional dancer after taking three seasons off to judge the Australian version of the show.

Eleven of the celebrity competitors and their professional partners were revealed on Good Morning America 24 February 2015. Witney Carson's celebrity partner was reported to be Chris Soules from The Bachelor on 4 March 2015; this was confirmed six days later, after that show's finale, by Good Morning America. At the age of fourteen, Willow Shields is the youngest contestant ever to compete in the show (taking the record from Zendaya, who was sixteen when she competed in Season 16). This is the first season since Season 15 with only three finalists instead of four, and the first season since Season 14 with only four semi-finalists instead of five. 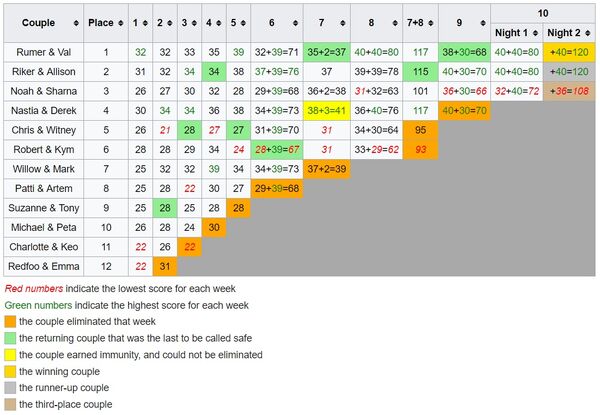 Unless indicated otherwise, individual judges scores in the charts below (given in parentheses) are listed in this order from left to right: Carrie Ann Inaba, Len Goodman, Julianne Hough and Bruno Tonioli.