Dancing with the Stars 8

The eighth season of Dancing with the Stars premiered 9 March 2009.

The show generally followed the format of previous seasons, with thirteen couples, although there were some changes, including two new dances, Argentine Tango and Lindy Hop, and an occasional dance-off between the bottom two couples, in order to determine who would be eliminated.

On 19 May 2009, Olympic gymnast Shawn Johnson and Mark Ballas were announced as winners; actor Gilles Marini and Cheryl Burke placed second, and reality star Melissa Rycroft and Tony Dovolani placed third. All three finalists returned for the all-star season. Melissa Rycroft was agian partnered with Tony Dovolani and crowned the winner of that season. Shawn Johnson was partnered with Derek Hough and finished in second place. Gilles Marini was partnered with Peta Murgatroyd and finished in sixth place.

Two replacements took place prior to the season premiere. Country singer Jewel, partnered by Dmitry Chaplin, suffered a fractured Tibia and was forced to withdraw. She was replaced by Playboy model Holly Madison. Nancy O'Dell, the then co-host of Access Hollywood, was forced to withdraw from the competition due to a torn meniscus, which required surgery. She was replaced by Melissa Rycroft, a former Dallas Cowboys cheerleader who won Season 13 of The Bachelor. She only had two days to practice her first dance. 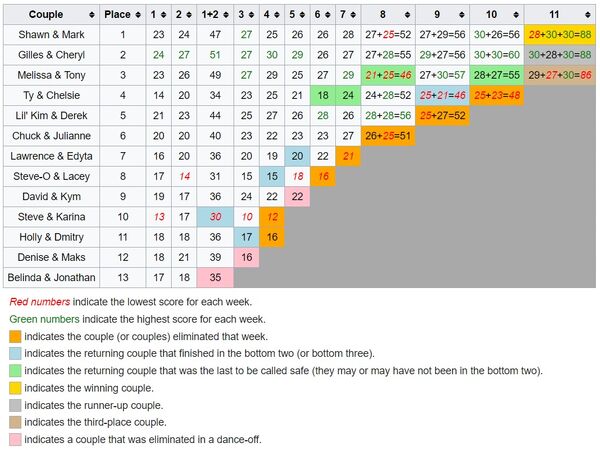 David Alan Grier, Denise Richards, Chuck Wicks, and Holly Madison did not land on this list.

Individual judges' scores in the charts below (given in parentheses) are listed in this order from left to right: Carrie Ann Inaba, Len Goodman, Bruno Tonioli.

Dancing With The Stars

* Due to an injury, Melissa Rycroft was unable to perform her Jive, or as part of Team Mambo, on the live show. Lacey Schwimmer filled in for her on Team Mambo instead. Rycroft's rehearsal tape for her Jive was shown and scored, as Steve-O was forced to do in Week 2.