Dancing with the Stars 9

The ninth season of Dancing with the Stars premiered 21 September 2009 with a three-night premiere on ABC.

This season included sixteen celebrities, with three double-eliminations halfway through the season.

Four new dances were introduced to complement the large cast. Those dances were the Bolero, Lambada, Country Two-Step, and the Charleston. The Hustle returned for a group dance.

Tom Bergeron and Samantha Harris both returned as hosts. This was Harris' last season as a host. Len Goodman, Bruno Tonioli, and Carrie Ann Inaba all returned as judges. Baz Luhrmann appeared as a guest judge in Week 2, temporarily replacing Len Goodman.

This season was greatly affected by injuries and illness. Beginning with this season, the producers are imposing a maximum five-hour limit on rehearsals as an attempt to reduce injuries, which have been on the rise in recent seasons. Also, contestants must take 30-minute breaks after every two hours and they must take one day off a week. However, in an interview with TV Guide, Maksim Chmerkovskiy said "nobody really follows it": 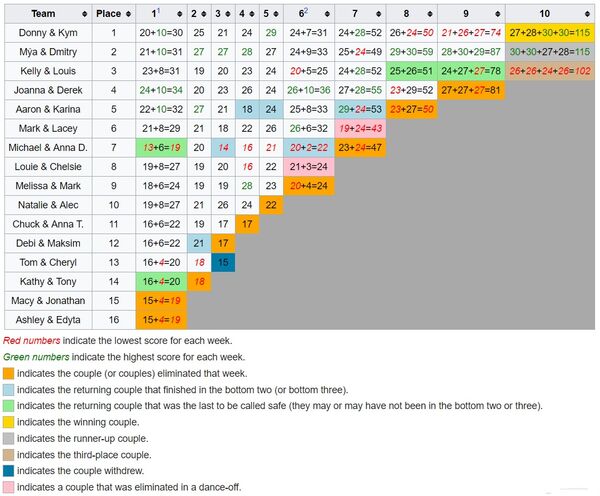 Chuck Liddell is the only one not on this list.

Individual judges scores in charts below (given in parentheses) are listed in this order from left to right: Carrie Ann Inaba, Len Goodman, Bruno Tonioli.

Barry & Robin Gibb on DWTS US